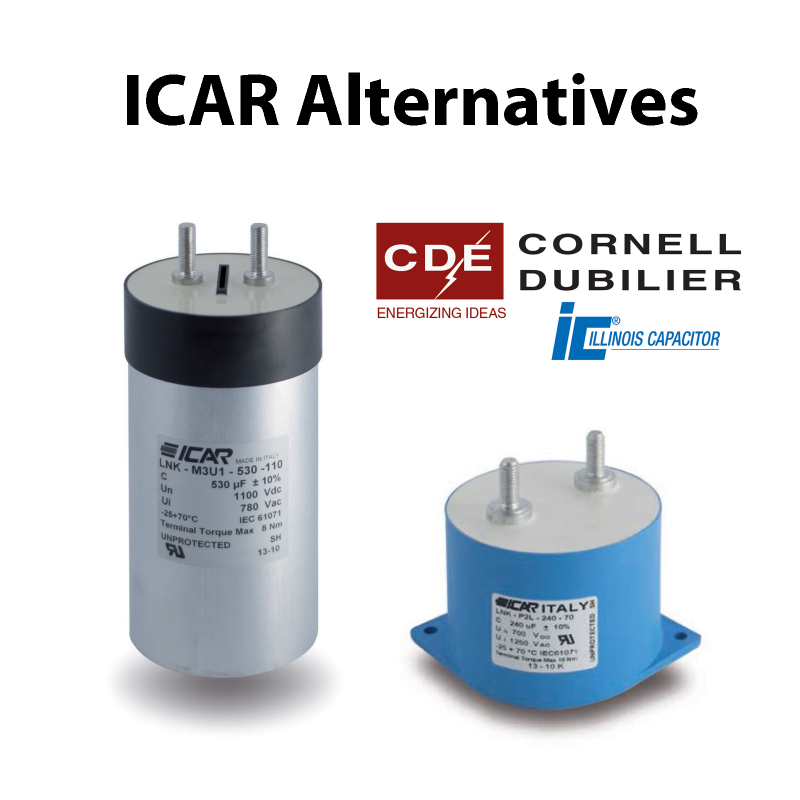 DMTL is a fully franchised, authorised Cornell Dubilier (CDE) distributor and, as Design Distributors, are especially positioned to address the confusion and answer the questions.

It is always a challenge when a manufacturer is no longer able to supply.  The knock on effect can be enormous, with customers, projects and applications being left in limbo.  The demise of ICAR has left just such a void in the supply of Film capacitors, causing confusion and questions.

A Little About ICAR

ICAR was one of the leading manufacturers of electrical capacitors and systems in low and medium voltage. DMTL have helped customers source capacitor alternatives for many years with a broad offering in this sector.

Within this article, we will look exclusively at the ICAR alternatives available from Cornell Dubilier.

A Little About Cornell Dubilier

They really excel with applications and custom capacitor designs for critical applications.  Their access to CDE engineers, their global logistics, sales and distribution network all lend support to a customer’s decision to approve a CDE Device.

Film capacitors can come in a very wide set of parameters, with ranges of capacitance from microfarads to millifarads and voltages often running into kilovolts.

Unfortunately, the physical layout, from cylindrical to square box, means that a direct drop in replacement may not be immediately apparent.  However, CDE is at the leading edge of film capacitor technology and is willing to work alongside DMTL to support customers with existing ICAR applications.

The below table outlines the ‘cross over’ already established. DMTL are also working hand in hand with all of the technical team at CDE, to handle devices that may not be covered by this ‘first pass’ list.